This week’s Book Trailer Wednesday pick is Fallen by Lauren Kate. While my initial interest in this book wasn’t because of the trailer it did play a deciding factor in my choice. I found this book trailer while searching for a new book series for my teenage daughter to read. It was offered in a list of suggested reads, but the book cover was what first caught my eye. When I saw that it had a book trailer I immediately clicked the link. The video whet my appetite enough to want to read it myself.

I know this book sits at a higher price range than my average read, but in my daughter’s case, her books are always more expensive. She will not read an e-book, she claims to like the smell and feel of a real book in her hand. The thrill on her face when she reads a new story is priceless in my opinion. 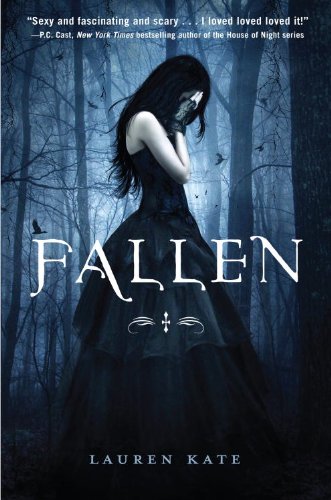 Mysterious and aloof, he captures Luce Price’s attention from the moment she sees him on her first day at the Sword & Cross boarding school in sultry Savannah, Georgia. He’s the one bright spot in a place where cell phones are forbidden, the other students are all screw-ups, and security cameras watch every move.

Even though Daniel wants nothing to do with Luce–and goes out of his way to make that very clear–she can’t let it go. Drawn to him like a moth to a flame, she has to find out what Daniel is so desperate to keep secret… even if it kills her.

I found the whole premise of this book fascinating. While I’ve not read many books about angels in general, the originality of this storyline left me intrigued throughout. There were certain aspects that were obvious from the start, while others you were left to figure out as time went by.

The main character was likable. I didn’t notice any blatantly annoying traits in Luce that might make a person roll their eyes. She was a typical confused teen with a lot of craziness going on around her. I felt the descriptions of the shadows were well thought out.

Favorite Character: My favorite character was Arriane. She has just the right mixture of crazy and humor.

Quote: “Not so long that I’ve forgotten that you’re worth everything. Every sacrifice. Every pain.”

The story wasn’t perfect, but I enjoyed it and believe my daughter will as well. My biggest complaint would have to be the parents. It just didn’t seem plausible for such supposedly loving parents to abandon her at the hospital. The state of neglect explained by the author made the possibility of the camera sabotage sustainable.

It had a good ending for this type of ongoing series. While not all our questions were answered, the author wrapped it up nicely so we would be ready for the next release. I still hold enough questions about the history that I’m not waiting for my daughter to ask for the next book.

Overall, this story was a great teen romance. While there are a few fighting scenes, there’s no real violence and the romance is clean. Both characteristics make this an excellent choice for my teen. It also holds enough intrigue to entertain even an adult, if you like this kind of book. I give it 4 hearts.