Review of Torment by Lauren Kate

This week’s Book Trailer Wednesday pick is Torment. This is the second book in the Fallen series by Lauren Kate. In some ways, I liked the special effects of this book trailer better than the first, but my desire to continue the story prompted my purchase more than the trailer itself. 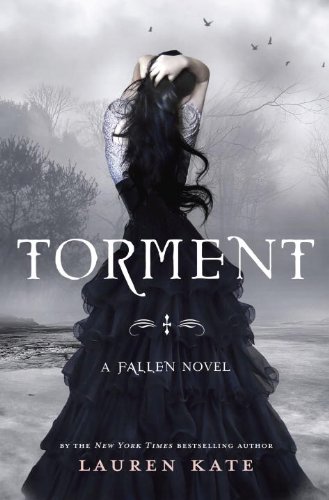 That’s what it’s like for Luce to be apart from her fallen angel boyfriend, Daniel.

It took them an eternity to find one another, but now he has told her he must go away. Just long enough to hunt down the Outcasts—immortals who want to kill Luce. Daniel hides Luce at Shoreline, a school on the rocky California coast with unusually gifted students: Nephilim, the offspring of fallen angels and humans.

At Shoreline, Luce learns what the Shadows are, and how she can use them as windows to her previous lives. Yet the more Luce learns, the more she suspects that Daniel hasn’t told her everything. He’s hiding something—something dangerous.

What if Daniel’s version of the past isn’t actually true? What if Luce is really meant to be with someone else?

The second novel in the addictive FALLEN series… where love never dies.

In some ways, I liked this book better than the first. The author gave us a lot more details on the back–story, but left enough of the mystery unanswered to keep reading the next story.

There are several new characters in this book, as well as a few of the old ones. I got excited when they brought Arriane into the story, but her position in the storyline was minor. Just a bit disappointing since she’s my favorite for the series. The author managed to bring more truths to light about Cam, which made me question my opinions of him.

In Torment, Luce spends most of her time with either Miles or Shelby.

Miles: Miles is a classmate that befriends Luce on her first day and makes her feel less of a freak. He comes from a very old respected family. The percentage of angel blood is minimal, but he still classifies as a Nephilim. He admits to wondering at times why they even allow him in the school.

Shelby: Luce’s roommate at the new school. She’s a human–angel hybrid that was raised by a single mom. I didn’t really like her at first, but she grows on you. She comes off as spoiled, jealous and just downright mean.

The introduction of the Nephilim, the offspring of fallen angels and humans, adds an interesting new aspect to the series. I found the interaction between her and Miles sweet. Overall, the entire encounter with this new group has brought about a metamorphosis in her character that I truly enjoyed. No longer is she simply this girl that has love on the brain constantly. She finally starts asking the hard questions, and learns to find answers for herself. She develops an assertiveness that makes you want to cheer and say it’s about dang time.

My favorite aspect of the book is still the whole demon verses angel theme. I love the way the author writes. She puts so many things into question about the possibility of a misinterpretation between who is actually good or evil.

Although I enjoyed both Fallen and Torment, I’ve decided to only review the two books in the series. I did purchase the third book, but I had a hard time reading it. It was just too much teenage drama for me by book three, which jumps out of my enjoyment zone. My dislike of certain types of story lines isn’t the author’s fault. Therefore, I believe it would be unjust to both the book, and its possible readers to review it. My daughter loved the books, so if you enjoy YA paranormal, I do highly recommend the entire series. I give this 4 stars.